On our first night at the 2016 Young Living Convention, we got to hear some touching reports on the work of that the Young Living Foundation has been able to do over the past year.
Since last summer, both Ecuador & Nepal have had severe earthquakes, and the Young Living Foundation has been able to mobilize huge relief efforts in both of these areas.
Gary Young, along with his son Jacob, took a special interest in rebuilding a Nepali village called Yarsa, which suffered close to 100% devastation at the end of a chain of earthquakes, destroying homes, schools, and most farmland. The leaders of the region explained that although there was more than $4 billion in aid that was being sent to Nepal, hardly any was making it through to actual relief and reconstruction efforts.
The people of the area were very pleasantly surprised to see the leader of the Young Living Foundation himself, working on a backhoe, clearing debris, pouring cement, and taking so much personal care for the quality of life of the people of Yarsa. 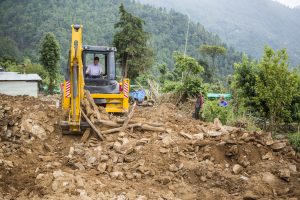 Gary Young on the backhoe clearing debris in Nepal 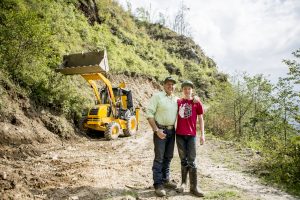 Gary & Jacob Young
We also got just a glimpse of the new products that Young Living has released this year! Stay tuned for more info about the new items that will be available soon.

Jeanette Castelino home-educated her two children. Due to her own and her extended family members' health challenges in the past, she has embarked on a quest for natural health. She has been using Young Living essential oils and supplements for over 18 years and is passionate to share what she has learned with those who are interested in taking responsibility for their health. Read more about Jeanette »

Questions? We have answers.

How can I get great prices on EOs?

Visit the Launch Your Healthy Life page for more details.

Great question! Check out this post for more information.

Are essential oils safe for kids?

Yes! Just be safe… read this article to learn how to safely use oils with children.

That’s a big question! See some of our favorites here.